The Perils and Plight of the Priceless Monarch Butterfly 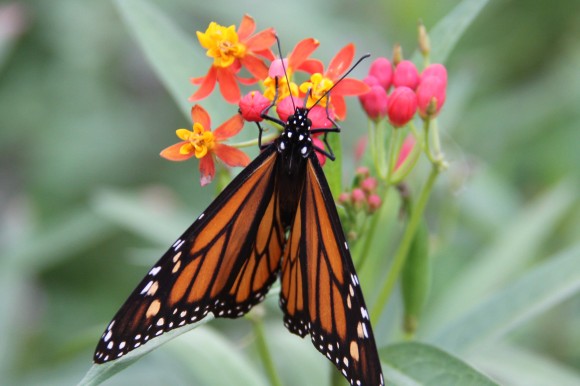 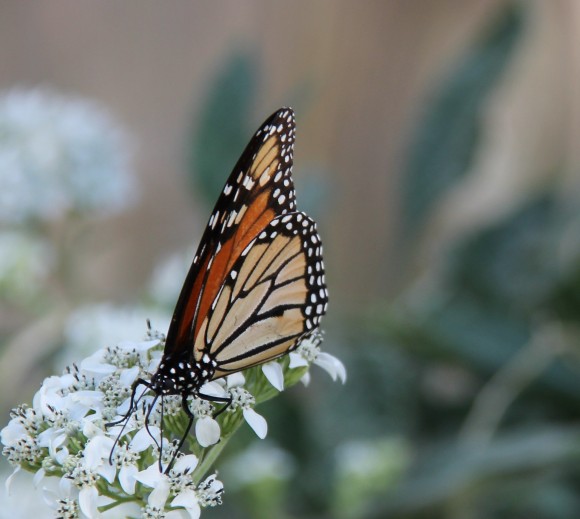 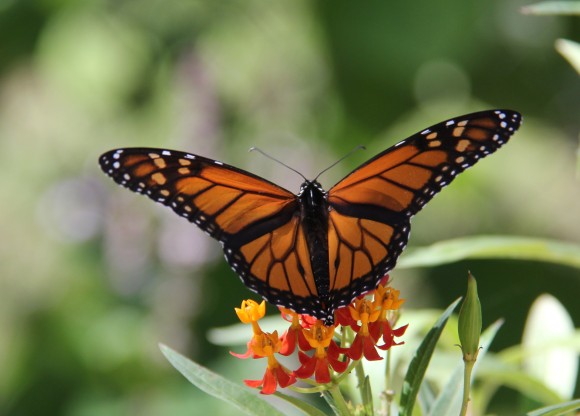 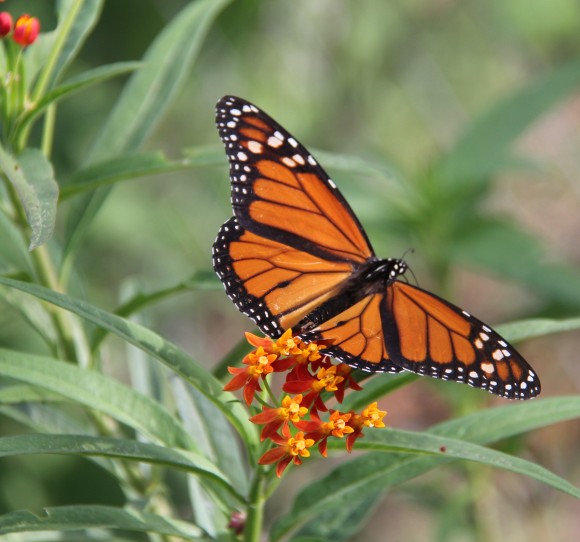 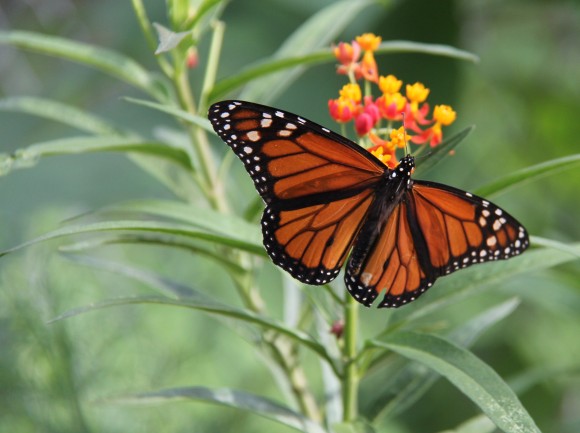 Monarch reallyt likes Mexican Butterfly Weed. Most of them favored this plant to the native Frostweed in my yard. 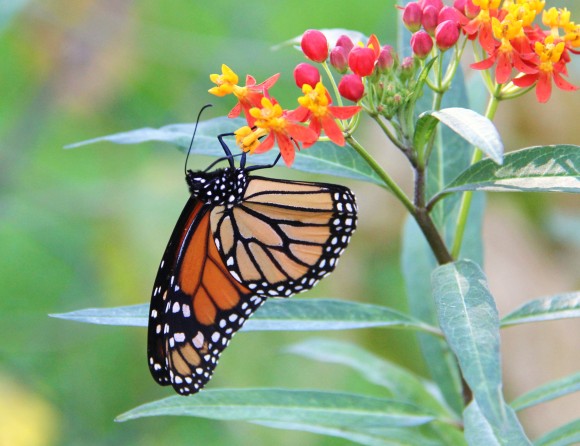 The Monarch butterfly is found in various parts of the world such as Canada, USA, Australia, New Zealand, Mexico and, even is a rarity in Great Britain if weather conditions are just right. It is the only butterfly as far as I’ve found that migrates an extremely long distance to winter in the fir clad mountains of central Mexico. In other parts of the world where the climate will sustain it year round there is no need to migrate.

In Canada and the US it goes through four complete life cycles where the fourth cycle is responsible for the first cycle of the next year. The 4th or last stage is born in September and October but here in my yard of central Texas there were three butters that were born between November 12 and the 19th. There were possibly more since I was only watching three chrysalis that I happened to find.

The last or 4th stage butterfly migrates to Mexico and those butters have a life cycle of 6 and possibly 8 months. During the winter months the butters in Mexico congregate in huge masses as they hang on the branches of the fir trees in the mountains. The hibernating butters, simply put “hang out.” This 4th stage butterfly comes out of hibernation about February and March, mates and then begins its return to the US and Canada. This last stage will look for milkweed plants as it begins winging its way north and east. The Monarch butterfly only hosts on Milkweed which has rapidly declined as progress marches forward and replaces native habitat with highways, byways, homes, and shopping centers.

But lets not forget the use of pesticides which have also contributed to declining numbers. There is one in use that is similar to DDT.Scientists have now identified this one that points to colony collapse of bee hives. So this one pesticide is also now killing Monarch butterflies as well. Or at least believed so. Studies are ongoing and it will take years to get the government to ban its use.

And finally the wintering grounds are now being decimated by illegal logging and fir tree clearance to grow crops for the drug trade.

This year by early November it was estimated that only 3 million Monarchs had arrived. Once upon a time the wintering Monarchs covered the fir trees of many acres. Now scientists say the trees used for hibernation amounts to less than a few acres.

Then the last straw is a huge debate involving the Mexican butterfly milkweed. Some scientists believe this plant is potentially harmful since it is not “the real deal.” Meaning that it is a non native. However, surely some of the Monarchs have been nectaring on this plant in Mexico during migration for eons.

Experts tell us to plant more milkweed and I say that any milkweed that sustains the caterpillars and results in a hale and healthy butterfly then it surely is ok. No one has banned its sale in the nurseries. If “we” are to plant more milkweed then somebody needs to make the native seeds available. I have searched high and low for seeds on the Internet and have yet to find a source. My last hope is the Natural Gardener and The Lady Bird Johnson Native Plant Center in Austin, Texas.

In March and April the eggs are laid on milkweed plants. It takes about four days for the eggs to hatch into baby caterpillars, called larvae. The larvae then eat and grow and after about two weeks, the caterpillar leaves the host plant and attaches its chrysalis to another plant or an object. Metamorphosis then begins and generally takes 12-14 days but one that I observed took about 4 weeks before it emerged from its metamorphosing chamber. The chrysalis was attached to the stem of a Copper Canyon Daisy plant.

The first three stages of the Monarch has a life cycle of 2 to 6 weeks and sometimes a bit longer. Only the last stage butterflies live 6-8 months.

The overall color pattern is one that I can best describe as a stained glass effect. The orange and black coloration of the Monarch does not sound impressive but after seeing a Monarch in real time I believe anyone would agree that the Monarch is king of the butterflies. 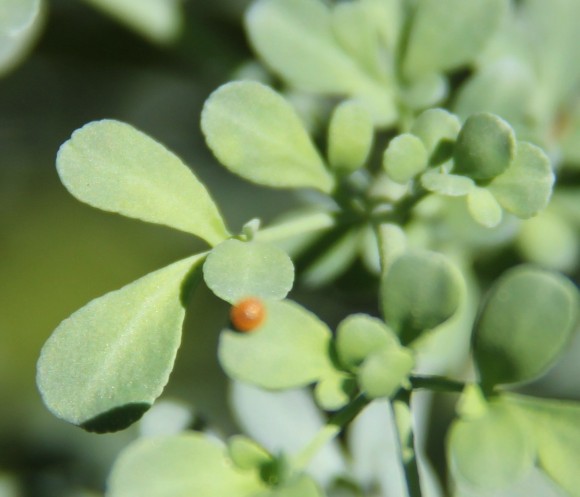 Butterfly egg of the Black Swallowtail on Rue, I do not have a pic of a Monarch egg which is a bit more oval than this one. 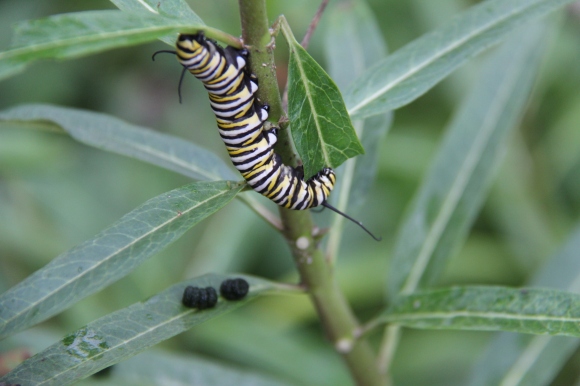 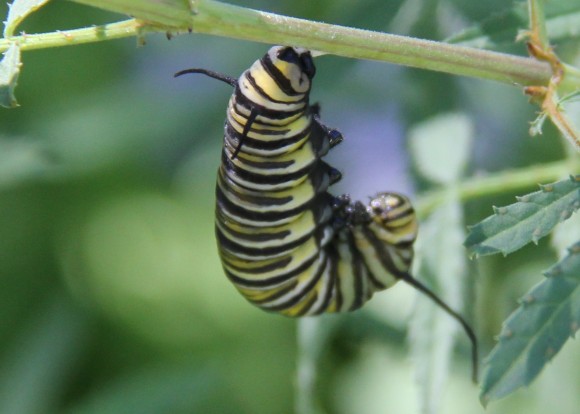 In less than 1-2 hours this caterpillar became the jade green chrysalis. 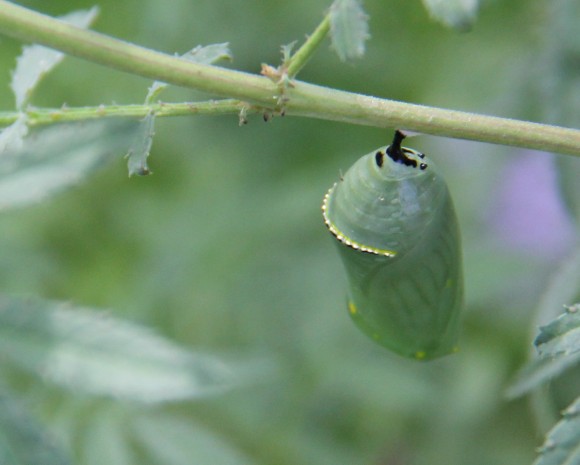 Jade green chrysalis, with gold rim at the top. Firmly attached to a twig 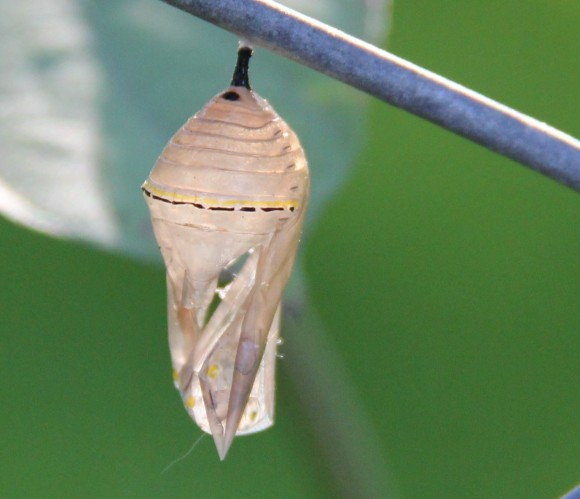 Chrysalis of Monarch butterfly. Its former home where it changed from caterpillar to a butterfly 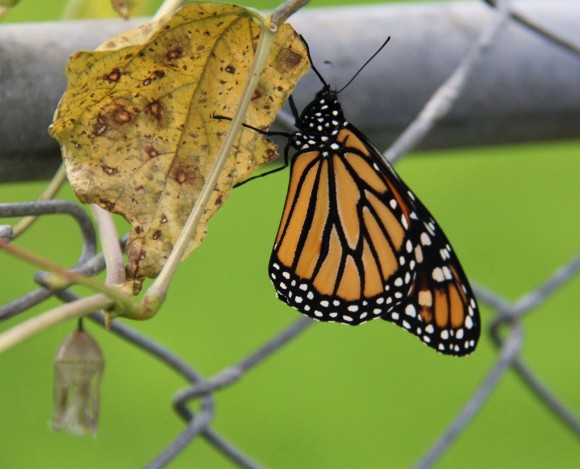 Monarch drying its wings. Frequent changing of shady to sunny. Time about 2:30pm 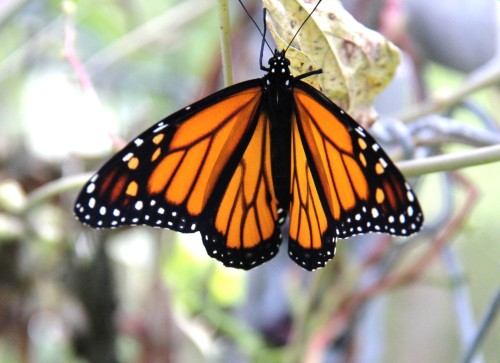 Newborn Monarch waiting for its wings to dry. It was shady in this photo. 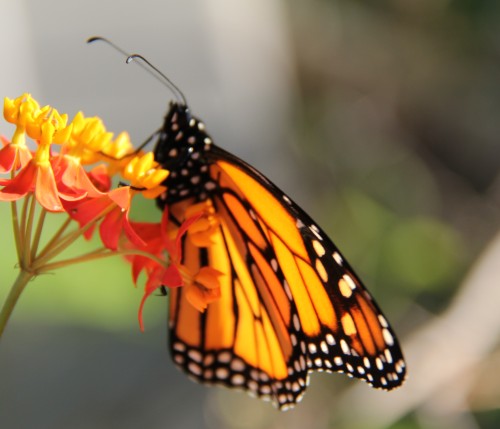