In The Garden: Lizard, Anole, Gecho of Central Texas

The male anole “blows out” his throat pouch as a means of attracting mates and to assert territory. 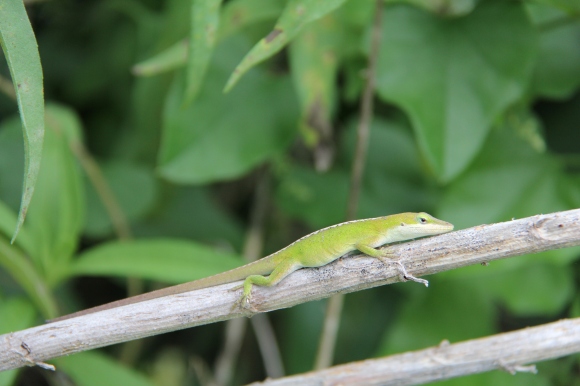 This little beauty was basking in the sun on the dead stem of a Frostweed plant that blooms in my yard in the fall. 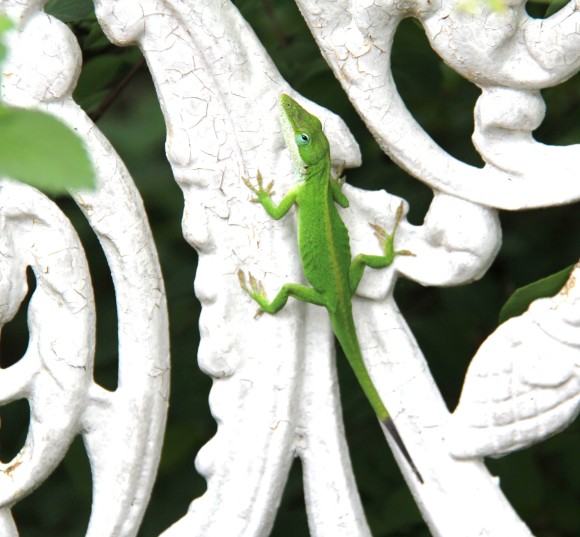 The little anole perched on a wrought iron chair on the front patio which is surrounded by lots of vegetation.

The friendly green anole here is a yellowish-brown color. Color is affected by temp and sunlight. I like this color. I think he/she knows it’s cute. 🙂 Well not really but it’s posing nicely for me in this photo op. 🙂

An odd looking little creature that was introduced from Europe. Eats roaches/insects and is considered beneficial. This is the largest one that I’ve seen It was perched on cracked plastic garden pot- Outside of course. They thrive inside homes if it can escape the clutches of a cat.

Look closely or you will miss the lizard.
The Texas Spiny Lizard in this photo blends perfectly on this small decaying tree sapling.

This Green Anole changes color depending on temperature and sunlight. In this pic the anole is looking dapper in his brown suit.

I have not posted in a while so I’ve had a bit of a problem with the captions. Not sure why they did not show but it might be because I changed the photo sizes several times before inserting into the post.

Top three pics are of the Green Anole (anolis carolinensis)

The spoted one is a Mediterranean House Gecko (hemidaclylus turicus)

The Texas Spiny Lizard (sceloporous olivaceus) is the gray lizard perched on the decayed small tree that had grown into the chain link fence. He is so well camouflaged that he/she is almot invisible.

The last pic is of the Green Anole (anolis carolinensis) in his brown suit for the day.

A few photos here to give my viewers, readers, lurkers, and visitors a glimpse of some of the small creatures that I encounter, almost on a daily basis. I often get a fleeting glimpse of these beneficial little critters as I water my butterfly garden or walk about my yard. I generally try to have my camera nearby so that I can grab a pic here or there. These pictures are not so much here as they are there simply because I had to do some mad scrambling to capture these little beauties on film or rather digital mode.

All of these are beneficial for they eat small insects and I think they are just cute. I really feel entertained when I see one on a leaf or twig as they bask in the sun.

The anole dressed in his brown suit was almost like a pet. I saw him almost daily on the same spot of wood. I could see him watching me and he only moved when I needed to move the 2×4 that was his basking spot. After two months he had disappeared and I am pretty certain that he had been eaten by a predator such as a snake. I was sad when he no longer made an appearance but I knew that eventually he would meet his Waterloo. The literature says that an anole in the wild lives an average of two years but can live up to seven years in captivity.

Please do not reblog without permission.