Please ignore the multiple postings of this bird. There is a glitch in the hitch of my blog. I have labored over a Monarch butterfly post off and on for weeks and those photos have doubled and tripled as well. I have deleted and begun anew until I am sick of it all with the Monarchs. So these birds will just stay. I have no idea what to do about the glitch. Maybe it will go away. Or maybe it is what it is- whatever that might be. 🙂

I am going to blame my posting of these dreadful bird photos on Andrew Hardacre who suggested this post. 🙂 http://ajh57.wordpress.com/

I took these photos in September through a window screen. I was desperate to get some photos of this bird since I knew not what he/she might be. So I did what any self-respecting bird and nature fanatic would do. Just shoot through the window screen and hope the ID field marks are good enough to identify the bird.I have looked in Sir Google and all my field guides and I just am not smart enough to figure this one out. I’ve been away from birding for about 20 years. Actual in the field birding, so I am “out of tune” and off-key by more than I care to admit.

If anyone “knows” this bird, leave a comment and I hope my face does not acquire too much red. 🙂

I’ve searched and researched and the best that I can do is to call this a subspecies of the Bullock’s or Baltimore Oriole. There are two sub species. I.b. bullockii and the other is I.b. Parvus. The other possibility is that this bird is a hybrid and according to literature the hybrids molt at least twice before the next spring. It also might not be possible to give this bird a positive ID if it is a subspecies.

I just wish that I had hired a carpenter to take the storm window off before fall migration. I had wanted to remove the screen but the entire outer window has to be removed. There is another window that “goes up and down” in front of the storm window. I plan to get that done soon since this is a window for optimum viewing and thus acts a perfect place to set up my little ole canon 60D with its el cheapo 200mm lens. 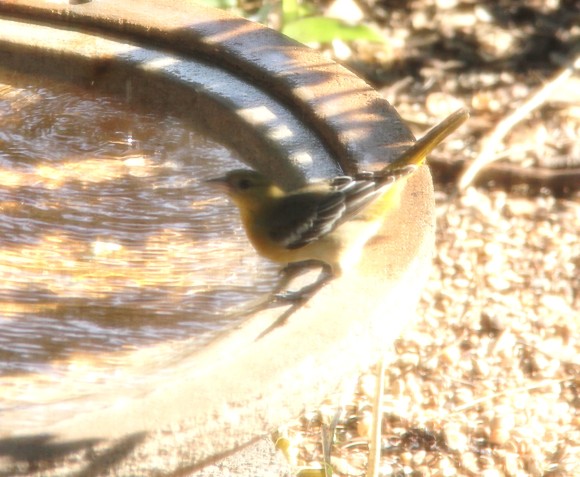 Photographed through a window screen. September 10, 2013

I enjoy reading and replying to comments Cancel reply