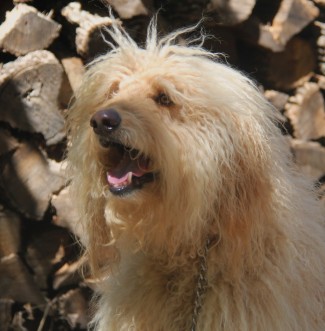 labradoodle (not my dog)

The labradoodle in the photos below is bathed and groomed about once each month. It takes (one) groomer 6-8 hours to bathe and groom two dogs. The owner of these labradoodles prefers her dogs with the shaggy look thus it takes the groomer much longer to comb through a LOT OF HAIR. It is said that the labradoodle was first mentioned in a book by Sir Donald Campbell in 1955.  Certainly his dog was not the first “mutt” that resulted from the combination of poodle and labrador. However, it seems that Sir Campbell was most likely the first person to coin the word labradoodle.
Further down the road and many miles away, The Royal Guide Dog Association in Australia, received a request from a woman in Hawaii who was asking for an allergy free guide dog because her husband was allergic to dogs. A Mr. Wally Conron was in charge of the breeding program for guide dogs and the job of producing or finding an allergy free dog became “his baby.” After receiving the assignment Mr. Conron thought it would be quite easy to produce an allergy free dog. Initially he decided to breed standard poodle to standard poodle. He reasoned that the poodle would be the right size as a guide dog, it had superior intelligence and trainability and its coat was tightly woven and shedding was virtually non existent. Many litters later and there were still no allergy free dogs. After that experiment failed he decided on another strategy. The second idea was to use the two smartest breeds- the labrador and a standard poodle ( these are the largest of the poodles). With this mix he hoped to get an allergy free dog. The first cross produced only three puppies. A hair sample of each puppy was sent to the woman in Hawaii and viola, one sample proved to be a winner.  Puppies that are bred to be service dogs are farmed out ( fostered)  with people who want to help raise, socialize, and teach basic commands to these dogs which are then returned to the association to complete their training as guide dogs. It seems that when it was time to “farm” the puppies out, no one wanted to foster the puppies because these were crosses and people considered them to be mutts. Mr Conron became desperate as time began running out for foster placement. Thus he reasoned that if he gave these cross bred puppies a name, then people would be more likely to want to foster. The ploy worked and numerous people wanted to foster puppies after they were given the name labradoodle. Media attention ensued and the labradoodle became the new rage as sort of a miracle dog. However, for Mr. Conron the challenge was just beginning. Reproducing more dogs was not that easy and there were quite a few dogs bred in order to get more numbers that were actually allergy free. He continued to breed these two breeds and he was able to produce a total of 31 dogs that were  “winners” meaning allergy free.  The breeding continued for a number of years but currently The Royal Guide Dog Association no longer conducts a cross breeding program. There are some other guide dog associations, however, that continue  to produce labradoodles.
Word about this great dog spread like wild fire and became international within a very short time. Soon back yard breeders saw the potential for making quick money and there arose a plethora of just about any kind of “doodle” because, to put it simply, it had become the new craze- fad- must have, kind of dog. There were snoodles, shoodles, and groodles, to name a few. But the craze for a designer dog did not end there. Backyard breeders began crossing the miniature poodles with smaller breed dogs as well. Today, designer dogs remain popular but none of these cross breed dogs has gained admission into the American Kennel Club.  One of the biggest draw backs is the fact that the labradoodle and other poodle mixes do not breed “true.” This means that within any litter, size, coat, and body type varies. And out of any litter only one puppy to no puppy will have an allergen free coat.  Mr. Conron is now in his early eighties- retired of course and enjoying life breeding and training horses which happen to be his first love. He has never owned a labradoodle but his two dogs are purebred labrador retrievers. He has stated that he regrets that he was responsible for creating the labradoodle because people jumped at the chance to breed what they considered, a dog that is unique. Here in the states, this cross bred dog most likely, will never gain acceptance into the American Kennel Club. The mixing of these two breeds just can not produce puppies that all look alike. But there are many fans of this cross bred dog. People love the gentle disposition, cuteness, and intelligence of this mixed breed dog. The fact remains that individuals do not care if the dog has AKC papers or not. What matters is that the labradoodle is a good all around family dog and there is no denying that this gentle mutt is easy to love.   The pics in this post is one dog among four labradoodles that one family owns.  I can say with assurance after seeing these dogs up close and personal that they ARE CUTE and VERY SMART. 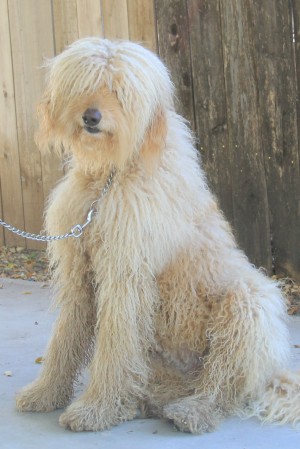 A Labradoodle that is bathed and groomed each month.