Before you decide to peruse or read this, the puppy in this story was a foster.  This little story for me had a bittersweet ending for I had become attached to “Spotty” and knew that as soon as he was strong and had gained weight and provided that he did not get sick, I would have to give him up to another rescuer who drove him to Austin,TX and then turned him over to another rescue organization. To this day I worry about who adopted him and if he is in a caring home that can provide for his needs and not allow him to be stolen as a fair number of pit bulls are. I think I did a very good job of getting him to a healthy weight and vigor and a puppy that was socializing very well with people, dogs, and cats,  when I had to give him up.
For various reasons, I wrote this story in detail and it is a long read if you choose to read it in entirety. Scrowl to the bottom of the story for two pictures that were taken about 2 weeks before I gave him up for adoption.

The last week of December, I arrived  at my vet’s office with one of my older cats that needed pre-dental labs. As I entered the office I noted that my vet’s wife was not behind the desk. In fact no one was in sight nor did I hear any voices. Then as if by magic my vet’s wife and another woman emerged from an exam room and as they made their way toward me, I could see that the young woman was carrying something wrapped in a blanket. They continued talking about the something that was in the blanket and then stopped about three feet from where I was standing.

The crux of the conversation: Ms M. “well I can’t keep him here because we have some parvo puppies that are being treated. So that is out.” The young woman, “well you know that I do fostering for the shelter and I had some parvo puppies and the germs are still in my house, so I can not keep him either. I just can not bring myself to take him to the shelter because his chances of making it would be pretty slim since he is so young and undernourished.” As I stood there next to my cat in the carrier, suddenly both women looked at me. Ms. M. did not hesitate for more than 30 seconds when she took the puppy from the woman’s arms and said, “here Yvonne, you are perfect and you’ll take him won’t you?” My mouth wanted to say no but the puppy was already in my hands. I looked at the puppy and then at the two women who now were looking at me with pleading eyes.  Of course, I knew that I had been had. Well, to get on with this little story. Ms. M. told me to hold on and  then ran to the back and got a small fuzzy blanket which she wrapped around the puppy. “Yvonne, I’ll vaccinate him for free and do any labs or what ever if you take this puppy.” I looked at the puppy again and saw that it was no less a white pit bull with a black spot above his tail and some small black dots scattered over his back. Right then and there I should have made another deal to get free lab work for my cat but I did not have the sense to even think about it. I simply blurted out, “this puppy is so thin and looks pitiful. He’s going to need some fast care to turn him around.” Ms. M. then told me that, yes indeed, the puppy’s temp was 2-3 degrees below normal.  I knew that he needed some rapid intervention.

I ran from the clinic to my truck, put the puppy in my lap, turned the heater on high and made my way home. I took quick peeks at the puppy as I drove and he looked up at me with dark listless brown eyes that seemed to say, I’m safe now.” Yes, I projected human emotion into the eyes of this pitiful puppy. Swaddled in a warm blanket he still felt cold as I ran my hand over his body. I had never seen or touched a puppy so thin.

I just happened to have a helper that day. I asked him to set up a large wire crate in the den.  I filled two hot water bottles which I wrapped in towels. These were put in the carrier which was placed in the large wire crate. I put the puppy that was still wrapped in the fuzzy blanket on top of the hot water bottles and closed the door of the carrier. I then hastily soaked some Purina EN canine in warm water and then added a tad of feline Purina EN to that mix which was then placed in a shallow bowl. I offered  very small amounts about every 30 minutes until he had eaten about a cup and one half.

For additional warmth, I used portable reflector light with a 75 watt bulb that I rigged above the doorway of the cat carrier. I then opened the door of the carrier so that the puppy could feel the additional heat.  I replaced the hot water bottles with a heating pad. That evening I removed the heating pad after he was suffiently warm but left the hanging light in place.

The puppy was dehydrated.  I warmed a liter of Ringer’s Lactate in hot water in a small bucket and gave him about 75 ml  (2.5  ounces).  An 18 gauge needle is inserted under the skin between the sholder blades. Sub cutaneous is a quick method to hydrate. IV is better but the process is more difficult and involved. The warm fluids helped increase his body temperature.

By mid-afternoon of that first day he was more alert. I continued to offer small amounts of food every 2 hours. Clearly this puppy was starving and would have died that day had he not been rescued him.  Ribs, hip, and shoulder bones protruded from his frail body. There were probably too many puppies to compete for his mother’s milk. Being the runt of the liter he should have been taken into the house and given supplemental feedings along with allowing him to be the only puppy to suckle for a few minutes. That way he would be getting immunity from the mother’s milk. The temperature that morning was about 38 degrees and windy. That is when she intervened and took the puppy to my vet’s clinic. The day of his rescue the young woman who had been feeding he neighbor’s dogs noted that the did not eat nor attempt to suckle. He was lying next to an old shed. The weather that day was windy and 38 degrees.

I have yet to figure out how people have such disregard for an animal, that only wants some food, water, a warm place for shelter and at least a pat on the head now and then. These individuals had purchased a pit bull female and then a male but said to the rescuer, “we had not intended for her to have puppies.”  What a crock of dodoo. The town where I live has pit bulls coming out of the kazoo. It seems to be a status symbol among some groups of individuals. They just get a dog and toss it out or chain it in the back yard. This city has animal control but the laws are not enforced- just for some people.

After his little body was warm he either slept or watched the action in my house.  He lay on his stomach with his head barely visible. I could see that he was taking in all the sights and sounds of the house and of my other dogs.  Spotty adjusted completely that first day. He did not whine, yelp, or bark for attention or food. Of course, I did not give him a chance to cry for food. His cage was cleaned with fresh newspaper at least twice daily.  I gave him lots of attention so that he would be accustomed to handling and petting. And lastly I allowed him to socialize with my Australian cattle dog and to come in contact with the cats.

I am still angry that I had to give him up even though I knew I could not keep another dog. I become too attached. I have other animals in my care. I am too busy. It is too demanding emotionally and physically.  I vow to never foster another dog. 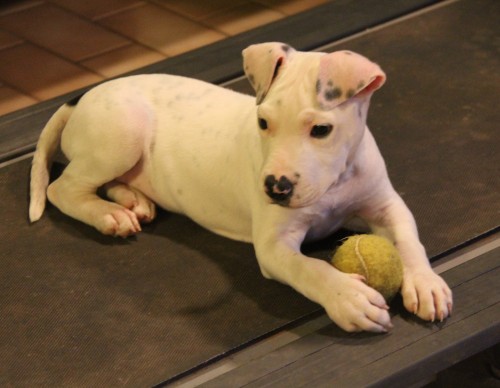