8 Comments
By petspeopleandlife The Vet's Pets 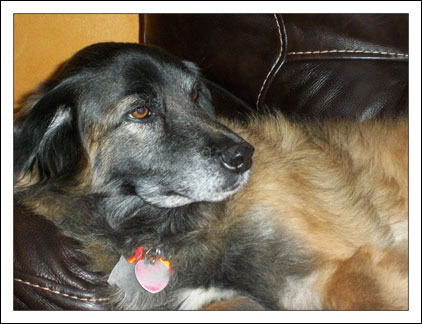 Note: This story about Dr. D’s found dog Marley, is my first attempt to write in many years.  I realize that the content and style of writing could use lots of improvement. In fact I had thought about re-writing all of it but I don’t have the time until much later. I wrote Marley’s story in Dr. D’s perspective with information that she provided.

Years ago, ten to be exact, I was walking in my neighborhood with my usual destination of about three miles. My walk was sort of a loop from my house and back with lots of dogs running loose. For some reason either owners didn’t care or these were dogs that simply had no home and were being fed by various people. My neighborhood is an eclectic mix of the old with the new and some with money with the house and cars to prove it. I was just eking by as a veterinarian and driving a used Toyota land cruiser.  On this particular day it was cold and windy with skies that were a dull gray which lent itself to me feeling as if I were enveloped in a shroud of gloom.

As I walked along, my thoughts returned to my dog Holly who had passed away six months earlier. I missed her terribly. She was a Border Collie that I had adopted from the Bryan-College station shelter when I was a junior at Texas A&M as an undergrad. Holly was not the usual Border Collie. She was so different from any BC that I had ever seen or known and I had seen my share of them as I had worked for a local vet all through high school and during summer hiatus from college. Holly was one of a kind; sweet, gentle, calm, and despite the proclivity of Border Collies being  hyper and always wanting to play or chase something and in need a “job” to do, she was totally the opposite. She stayed glued to my side and almost always underfoot. She was an excellent watch dog and never forgot anyone that just did not look or act “right”. I never taught her any basic commands except to “potty train” her to use the bathroom outdoors. Holly was not only an ideal companion but she was really one beautiful dog. Her coat was long and shiny.with a beautiful ruff of fur that looked almost like a mane. In the summer, I shaved Holly so that she would be more comfortable. It always seemed  that she relished the short hair cut.

I had walked for about an hour and passed near several old houses that were run down to the point of almost total disrepair. The yards were littered with old wrecks of cars,  junk, and pieces of trash that moved back and forth between the houses with each gust of wind. There were chain link fences that at one time had been erect but now were fallen over. I never saw any people in the yard but it was apparent someone lived in these old houses because the porches generally had a dog or two sleeping on the bare floor with only the wood beneath as a bed.

I continued my walk in deep thought and had long passed the old houses with the sleeping dogs. I plodded along and with each step my thoughts continued in the same gloomy state as the sky above me.  Holly would be walking beside if she were alive. And then about a quarter-mile from my home, sitting in the guttered side of the street was a small puppy. Alone! No other dog or human in sight. I began knocking on doors to see if the puppy had escaped from some one’s yard but nary a soul laid claim to the little urchin. What does one do in this situation? Leave the puppy that would either be HBC (that’s HIT BY CAR in vet terminology), eventually meet its demise at the hands of some cruel person, starve to death, or eaten by a predator such as a coyote?  The neighborhood was bordered by woodsy areas of thick cedar and scrub oaks- typical Texas hill country and habitat for predators. I picked the puppy up and it was very underweight- I could feel  its tiny ribs and backbone as I ran my hands through the puppy’s very dull and slightly matted fur. As various puppy diseases trickled through my brain, I just hoped that this pup did not have parvo or distemper and had not shown signs of these diseases yet. Clearly one thing was certain the pup was malnourished. So without pondering the dilemma, I continued my walk, with of course, the puppy tucked inside my jacket.  This time I was not merely walking but almost running toward home. I was breathless by the time I had entered our back door. It was a Saturday and my then husband was at home. After I gave him the “save the puppy” story, I soaked some dog food in water for a few minutes so that it would be palatable for my new acquisition. The little waif ate with as much gusto as its little body could muster. By the time the puppy had finished eating I was lying prone on the floor with a pillow under my head.  My head throbbed and as I contemplated what to do with the puppy it came over to snuggle on the pillow beside my head. At that point my husband said, “why don’t you keep the puppy?”. Within short order I learned that the pup was a female. She continued to lie on the pillow next to my head. Was it providence that I found her? Her tiny body next to my throbbing head was warm and soothing. I found that I was no longer concentrating on the pain of  my neck and head.  And so, Marley slowly began to take Holly’s place. I felt guilty about loving another dog and at the time and I did not want another dog to fill the void that Holly had left.

Marley is now 10 years old and her muzzle has grayed. She loves me as Holly once did. Marley is as sensitive as Holly. She reads my emotions and will sit by my side when I am upset. Yes, I have been truly blessed to have another dog who filled Holly’s absence in such a loving way.  I have a treasure trove of  Marley’s various behaviors. In the future, you will learn how I selected Marley for her name. And no, she is not named for the Labrador of the book and movie. 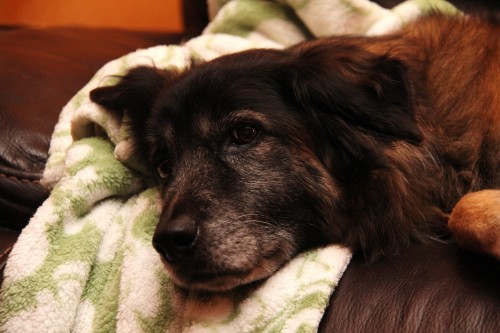 Marley daydreaming on a blankie (September, 2012)

marley walking in the back yard

8 thoughts on “My Dog Marley”